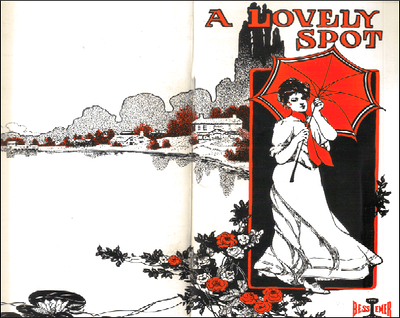 I’m a bit of a history nerd. There’s a pile of 5-inch books on my desk, and I can't keep from talking about it whenever an opportunity arises. In fact, at social gatherings my wife has to nudge me because I don’t realize my audiences’ eyes have glazed over as I spout off facts about Theodore Roosevelt’s cattle ranching days in the Badlands. Fascinating stuff!

At the moment my passion happens to be Turn-of-the Century amusement parks.  In my digging I recently happened upon a 1904 brochure describing Exposition Park, an amusement park in Northwestern Pennsylvania that opened in 1892 and is still in operation today. What captured my attention about this brochure (aside from the actual history) were the components utilized to create a superb piece of content marketing.

To give you an idea of what I'm talking about, here are 7 basic and effective tactics that should be incorporated into your content today.

1. Make Use of Storytelling:

The official title of the brochure is The Affable Mr. Shadd, a story which recounts the exploits of the hapless but friendly Mr. Shadd as he spends a day at Exposition Park. With this tactic the reader can actually experience the park’s attractions rather than just being told about them.  Your company can do the same. You might not be able to tell an actual story like the example per se, but you should think of ways to put your products or services into a context that demonstrates its value and answers your customer’s questions.

The use of personas in content marketing is essential to success. The author of this brochure seemed to understand this as he has Mr. Shadd interact with characters representing the amusement park’s target demographics, in this case a young couple in love, a family who vacations regularly, and an older couple who enjoys the social scene. The author also demonstrates how these personas experience the park as well. For companies, knowing who your ideal clients are will help in creating targeted content that is both useful and effective.

Right away the brochure establishes a light and funny tone which is appropriate given that the subject is an amusement park. This also helps recreate the experience of park. Tone is something many companies forget about in their content. Do you want to come off as more authorities on a topic? Should your e-book take a more light-hearted approach? The answers to these questions should be determined ahead of time and with your buyer personas in mind.

Making my way through Mr. Shadd’s day, I found it hard to miss the large dramatic photos corresponding to the featured attractions in the story, again recreating the experience of the park but for my eyes. Visual elements are crucial to content marketing, yet many companies overlook them or they rely on ho-hum stock photography. You can’t afford to skimp here. Look for visual elements that grab attention, help demonstrate products, compliment tone, and illustrate information (i.e. infographics).

Design is another facet of content marketing that is forgotten about. The brochure, being a print piece, relied heavily on design and was laid out in such a way that it allowed me to read the story without distraction while then directing my eyes to the advertisements once you were ready to turn the page. Design is a bigger consideration than most realize. Too often we see landing pages that are cluttered and distracting, the fonts are too small, and the text is written in large blocks rather than short digestible paragraphs. Keep in mind, you can have the greatest content in the world but if the design is poor or confusing, then it’s likely it won’t be consumed by the audience you worked hard to get there in the first place. 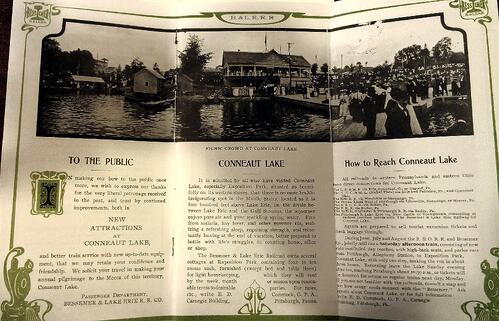 Interestingly, the brochure wasn’t produced by the park but rather the Bessemer and Lake Erie Railroad. And why would a railroad involve itself with the marketing of an amusement park? In that day resort destination such as Exposition Park teamed up with the railroads in order to bring visitors which translated into revenue for both parties. (Think of it as American Airlines working exclusively with Six Flags.) Today companies can work with vendors and agencies to co-author whitepapers or e-books; they can co-host podcasts or webinars; and they can sponsor industry research findings, all of which can mean increased exposure, thought leadership recognition, and efficient content creation.

As I mentioned above, the brochure included a number of ads from business that operated at or nearby the park. Nowhere in the story did it ever mention these businesses; however, should Mr. Shadd be talking about going to the beach, somewhere on that page would be an ad for a store selling swimwear. I didn’t notice this at first, but going back through, I saw this pattern held true for the entire story. Subtle and yet effective. The same holds true for the pamphlet itself as it explores the park. And how does one get to such a “lovely spot?” Why, by traveling on the B & LE RR of course. As a company, don’t try to sell directly; look for indirect methods instead.

Historical side note:  (Are your eyes glazing over yet?) The B&L E RR was a division of Carnegie Steel (later US Steel) which was one of the largest companies in the world. They were the modern version of Apple or Microsoft. The point being, if the big boys (like Coca Cola) can invest in content marketing so can you.

Whether the author of the brochure recognized what he was doing when he published this piece of marketing material or not is unknown; however, in researching this kind of advertising further I’ve discovered more than a few other similar examples. In any case, what this brochure does show is that content marketing is not necessarily a newfangled fad, but rather a timeless strategy that worked just as well then as it can for your company now.

Ron Mattocks is a social media and content strategist at Lynton Web Solutions. When not working, he is either running one his five kids to another social event or is being mocked by his wife for his love of Coldplay.  In his few moments of quiet, he tries to post on his personal blog, Clark Kent’s Lunchbox. You can follow him on Twitter at @CK_Lunchbox or connect with him on LinkedIn.