Experiential marketing can be a huge win, but not when it's offensive. Continue reading to find out what went wrong with Airbnb's latest giveaway. We will also be discussing the the U.S. "Space Force," social media, as well as GDPR concerns, in this week's Inbound Marketing Highlights. 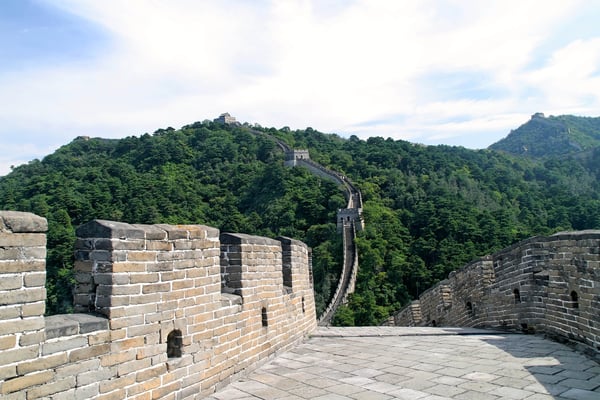 Airbnb’s highly anticipated giveaway has been cancelled due to backlash. So what was the grand prize? An overnight sleepover on the Great Wall of China! The event would have included a multi-course gourmet dinner, traditional music, and many other cultural luxuries. In order to enter, contestants had to answer the prompt, “'Why is it more important now than ever to break down barriers between cultures? How would you want to build new connections?'

While this grand prize sounds like fun, many locals expressed their concern about this being on an important landmark. And according to the Beijing Yanqing Cultural Department, Airbnb’s application for this event was never received to begin with. Although Airbnb has had luck with experiential campaigns in the past, this one has not panned out to be success like some others.

The U.S. government has made an exciting announcement: they are proposing a 6th branch of the military called the “Space Force,” which will focus explicitly on space exploration as well as space-related war issues. With other countries like China and Russia linking their space programs to their national militaries, the idea of the Space Force is to confront space related threats  coming from North Korea and Iran. While this potential program is gathering mixed reactions from citizens, even more controversial is the logo of this new program.  A political action committee, which is part of Trump's 2020 presidential campaign, sent out a mass email asking its supporters to vote on a new logo for the project. Some of these logos drew criticism from social media users who thought one was 'too similar to NASA’s logo.' Almost all logos include the word “Space Force” with one of them using the phrase “Mars Awaits.” See the logo for yourself here.

Most Companies Are STILL Not GDPR Compliant

With all of the hype about the GDPR deadline and companies rushing to comply, it turns out that only 34.5% of companies are fully compliant to this day. And while just over a third of companies are compliant, 32.7% hope to be compliant by the end of the year and 11.7% are taking a 'wait and see' approach.

Additionally, only a small percent of these responders are confident in their third data party knowledge while the large majority is either still learning or is currently confused. The lack of confidence in the GDRP is alarming considering the potential penalties of non-compliance.

See Also: The GDPR: What It Is and How You Can Prepare

With Facebook’s traffic declining by nearly half these past two years. YouTube is about to pass them as 2nd most visited. While this may sound scary for Facebook, they as a company are still doing well with other products such as WhatsApp and Instagram. YouTube, which is under the parent, Alphabet is seeing not only increased traffic but also increased viewership, with new products like YouTube tv's recent success. With YouTube and Facebook in a tight race for second, both don’t even come close to the amount of visits as Google, who remains number one. Decline in Facebook use could be due to both their privacy scandals as well as their inability to reach Generation Z.

See Also: #DeleteFacebook—What’s It All About?

As we mentioned above, the GDPR regulations have not yet been mass adapted, despite being rolled out three months ago. Though there haven’t been consequences to violators yet, the world has been more aware of the growing problem of data and privacy abuse.

"Companies in the U.S. historically are data hoarders. That's what they do. They gather tons and tons of data, sometimes even without necessarily knowing what their ultimate goal is." - Tanya Forsheit, Chair of Privacy at Frankfurt Kurnit Klein and Seltz.

Is privacy even possible at this point? Or are we too far gone? Read the rest of the article and decide for yourself.