Whether you're starting a new business or have an already existing brand, your company logo carries a great deal of weight. Recently, SmartSign took a look at 2000 of the fastest-growing businesses of 2016 and analyzed what their logos had in common. You'll be surprised at what they found... 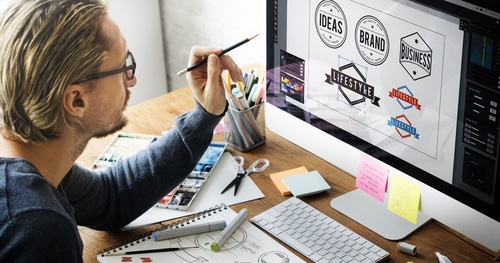 SmartSign's research identified a number of key factors that are common among successful brands.

A large percentage of logos from America’s fastest growing companies feature logos that are understated and minimal. If a person has to stare at your logo for several seconds to figure it out before their “Aha!” moment, then you’ve already lost the battle. A minimalistic logo also allows for scaling without losing the design’s detail. This way you can place your logo on a billboard, t-shirt, or pencil while still retaining its effectiveness in communication.

Strong use of darker colors like blue, black, red, and charcoal gray is a noticeable trend among up-and-coming brands. The minimalism of a two or three color logo keeps reproduction and printing simpler while projecting the brand message in a straightforward manner. Almost half of the logos analyzed in the study by SmartSign used only two colors, which makes the translation from color to black-and-white much more effective when printing programs for use in sponsored events, or faxing (yes people still fax).

Both Icon and Wordmark.

If you’re Nike or Apple, then you can do whatever you want because almost anyone can now identify the “Swoosh” or the apple with a bite taken out of it. But for most of us, our logo needs to include both the icon and the wordmark, working together to act as a brand identifier. In the analysis of more than 2000 logos of America’s fastest growing companies, only 4% of used an icon alone.

Eventually, if your brand becomes a recognizable household name, you may be able to drop your wordmark. But to start with, offering both forms of identifiers allows people to see your branding more clearly and easily associate it with your company. Incidentally, Nike and Apple began with logos that incorporated both wordmarks and icons, but were obviously able to drop the words as their companies gained prominence.

The entire purpose of a logo is to help people easily identify your brand and think of your company. Do not make the mistake of thinking that your logo needs to include a representation of what you do. The logo doesn’t give your company meaning; it simply acts as a representative.

The McDonald’s signature yellow “M”, for instance, conjures up thoughts of golden arches and has the ability to cause a deep desire for French fries. Originally part of the wordmark, the “M” has now separated itself and morphed into a sort of logo all on its own. It’s not a hamburger, or a fry. It’s just an “M." And it’s memorable.

Read more: 7 Questions to Help Determine If You Need a Website Redesign

A strong trend recently among the logos of successful companies is the use of sharp, angular shapes that tend to catch the eye more easily than soft, rounded shapes. This certainly depends on your company’s product, target audience, and the message you are trying to portray. (Obviously our aforementioned examples of Apple and Nike both have completely defied this, having used softer lines for many years—and clearly it has worked for them.)

Creating or re-creating a logo for a company is an important step that should take these aspects into consideration, along with many others. A strong designer will walk through the process with you, determining who you are trying to reach and what is likely to catch their attention. The good news is that logos of very successful companies can morph over time (think Pepsi). So if you have been stuck with a dud for a while now—don’t panic. Just re-design and move forward.