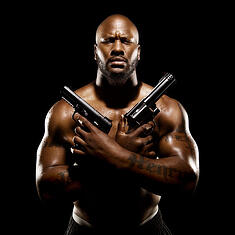 Depending on your level of American football IQ, you may or may not know James Harrison. James is a five-time National Football League (NFL) Pro-Bowler with 2 Super Bowl rings to his credit and is the handsome (gun wielding) gentleman pictured to your right. Would you be scared if you were lining up against him on a football field? Known for his aggressive on-field presence, Harrison is also a somewhat controversial figure for having previous run-ins with the law and making inflammatory remarks about urinating on NFL commissioner, Roger Goodell. I am sure Mr. Goodell was pretty pissed about that comment. Did you see what I just did there?

Harrison also has almost 290,000 Twitter followers and cultivates a nice presence on the platform through game ticket and  jersey giveaways and even the occasional opportunity to go see a movie with him. What Harrison can do (on his own) via Twitter, highlights one of the three key benefits that will be validated by the Twitter IPO today - clarity.

What Harrison can do for his personal brand on Twitter highlights its value. While traditional media might claim, in a vote of NFL players,that Harrison is the most violent, dangerous player in the NFL, Harrison can use Twitter to cut through the media clutter and post pics of his meals, his kids, his training and recovery regimens and whatever else he desires. On Twitter, Harrison can be 'himself' or rather, the 'self' he wants others to see without a media filter.

Much like James Harrison, whether you're building your personal or company brand, Twitter is one of the most useful tools to cut through media clutter and deliver a portrait of yourself or your company as you see fit.

The clarity and directness of Twitter can be both good and bad, of course. Just ask Alec Baldwin or Rihanna or even Freddie, the mascot for the NFL's Atlanta Falcons <---- now that shit cray...

If we pivot from NFL players and stars tweeting their thoughts and opinions we also have news agencies, brands and individuals tweeting links to their own content and industry leading content. If you're an inbound marketing geek, the ability of Twitter to highlight and promote content is probably one of its most valuable aspects.

Here's a perfect and timely example. Yesterday, the AMA retweeted one of our recent blog posts. How cool is that? There's nothing like having one of the most well respected marketing organizations in the world support your content.

Is Your Sales Team Ready For Inbound Marketing? via @lyntonweb http://t.co/B19SIQmava

Especially in the B2B space, Twitter is going to bring you the most value by letting you share content that will ultimately lead people back to your inbound website. When you bring people back to your website  - well that's when the magic happens. Content on Twitter helps you make that critical connection - which is the last 'C' we'll discuss.

Unlike Facebook, which offers a somewhat closed network that seemingly allows you ramble on and on and post pics of your kids that people are secretly sick of seeing but feel obligated to like, Twitter gives you 140 characters to bitch, proselytize, evangelize, supersize or do whatever. The ability of Twitter to distill a message into those 140 characters crystallizes the value of the connections and even the retweets it brings. If you want to fill your Twitter stream with BS, go ahead. But that type of content (and links back to crappy content) will quickly derail the value of connections you might build through the Twitter platform. If you can offer value consistently through Twitter's 140 characters, you will consistently create valuable connections.

With the Twitter IPO today, there will be loads of analysts flagellating about terms like EPS and ROI and ultimately whether Twitter can show shareholder value or has proven value. From where I sit, we wouldn't be talking about Twitter if it didn't have some sort of value. Sure there are many metrics and ways Twitter can be judged, but like Facebook and LinkedIn, Twitter will remain a vital part of social media and marketing ecosystems for a long time to come.

For all the analysts talking about not being able to prove the ROI of Twitter today - well good for you guys. What about the ROI of your Mom? Can you quantify that? See what Gary Vaynerchuk has to say about the value of your Mom and it will make you realize the real value of Twitter and (just maybe) social media in general.