We've seen horrible fails on social media time and time again. You want your content to go viral, but not for the wrong reasons. In this Friday Fails episode, let's talk about the latest fail on social media and steps you can take to make sure this never happens to you!

Hi everyone! I'm Bridget and welcome to this week's edition of Friday Fails. So this week let's take it back about 2 Fridays and think of where we were. We were all enjoying a hot dog or two, maybe having a beer, watching some fireworks. It was Fourth of July! And nothing is more American than Fourth of July and fireworks.

Well then a bit of a corporate social tragedy occurred. And a lot of us can remember this because it blew up. Of course we all want our content to go viral but not for the wrong reasons.

So we all remember this doozy, the photograph of "fireworks"that American Apparel posted to Tumblr. Which in actuality is a sad and tragic photo of the Challenger exploding soon after it left planet earth and exploded in the sky. Soon after it went onto Tumblr, it went onto Twitter where it went absolutely viral. It is now considered probably one of the most disturbing and upsetting posts that got out of control on social media. 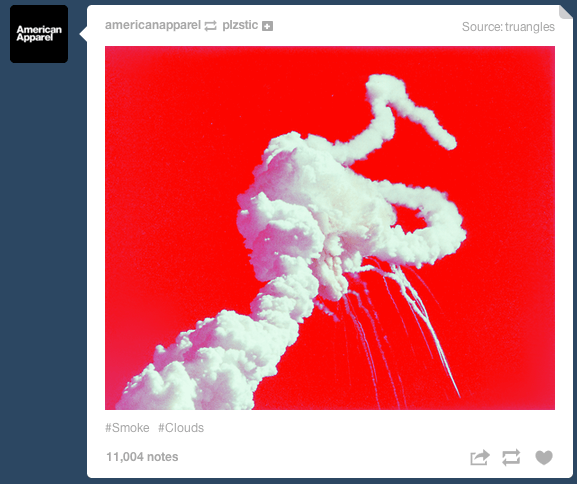 This one is not a topic that's not been covered before. I remember last Thanksgiving when JCPenney had some misspelled tweets that went pretty viral as well. So what we don't want to do is be the company that has the big misstep and goes viral for all of the wrong reasons.

So how do we fix this?

So again everyone, avoid these social media mistakes. Don't allow yourself to be part of this big fail. Thank you again and stay tuned for next week's edition of Friday Fails!